Number of Games to Reach Legend in Hearthstone

How long does it take to achieve the legendary rank in Hearthstone? This handy simulator will answer to this question and show how long it will take to reach legendary depending on your win rate and your current rank.

How does it work? Just enter your rank and your win rate and hit calculate. Depending on your machine it might take a couple of seconds for the simulator to run. You can adjust the maximum number of games to simulate to fine tune the results. A detailed explanation of the features is given below.

Probability of reaching legend in Hearthstone

How many games to reach legendary rank in Hearthstone

Cumulative probability of reaching legendary in Hearthstone. I.e.: You will reach legendary within X or less games with probability Y.

How does the Hearthstone Legendary Simulator work?

Once you hit calculate the simulator runs 10,000 simulations of a player with the given win rate and starting at the given rank. Each simulation runs until it hits legendary or the maximum number of games is reached (1,000 by default).

Among other data the simulator determines the average number of games it takes to reach legendary, standard deviation and confidence intervals.

Please note that the simulator only simulates (ldo) and while 10,000 runs is quite a lot, the numbers will fluctuate a tiny bit when hitting the calculate multiple times. For win rates below 55% you need to adjust the maximum number of games, but exercise some caution – numbers too big might crash the script.

What does the simulator show? 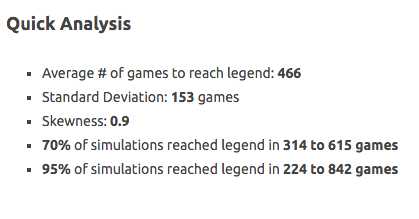 Average # of games: The arithmetic mean of the number of games of all simulations until they reached legendary rank. 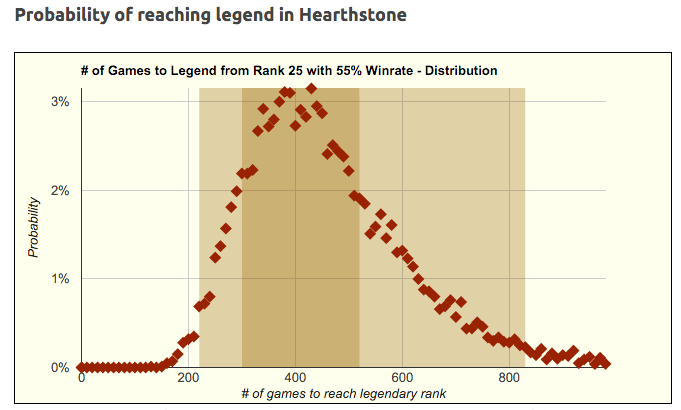 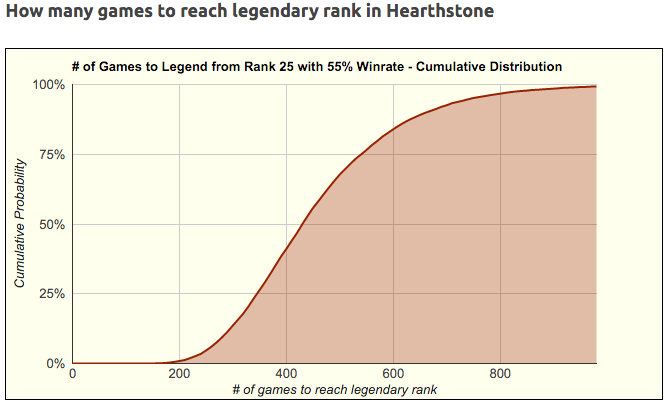 This chart is basically the same as the one above, just with the probabilities added up. The x-axis still shows the number of games and the y-axis shows the probability of reaching legend in x or fewer games. 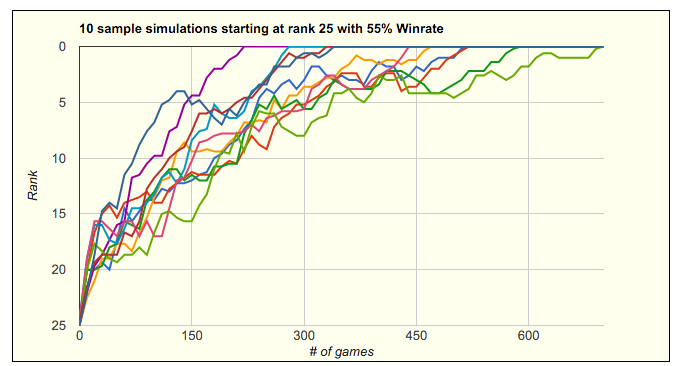 This chart shows 10 (out of 10,000) simulations and how the simulated Hearthstone players climbed over time to reach legend.

This table shows ten percentiles of all simulations - the top 10% that reached legend the quickest, the next 10% and so on until the slowest. This gives some more numbers to the variance that can occur. Those simulations were all done with the same win rate for each game, yet in the example on the right, the top 10% only needed one third of the amount of games the bottom 10% needed.

Those top 10% were not better in any way, they just were much more lucky than the bottom 10%. Well, that’s eSports (or anything that has random elements in it).

Very simple: Shows the probability of losing the next X Hearthstone games in a row with the given win rate.

While those numbers might seem small, don’t underestimate their significance over many games. Playing 100 games you’re almost guaranteed to lose at least 4 or 5 games in a row at least once.

The simulator abides by the rules of Hearthstone. No stars are lost for losses below rank 20 (and on the lowest level of ranks 15, 10 and 5) and whenever three games are won in a row the player gets a bonus star (part of a rank). Those bonus stars only apply until rank 5.

There seem to be some bugs in either your code or mine, and I don’t think my simple code has any. Your calculator shows an average of about 97 games to go from rank 5 zero stars to Legend with a 60% winrate, while my simple but seemingly correct algorithm gives me around 120 games. There are 26 stars required on that climb and no win streak bonus. What gives? Is your random not truly random and are you adjusting the chance of a win based on the results of previous games to hover around the desired winrate? Here’s my c# code for reference:

This is really cool! Could you add a parameter so that someone could find out how many games are required to reach a given rank, and not necessarily Legend? A lot of people just want to reach rank 5 and don’t care about Legend.

Wow this game is rigged, I’d rather bang my hot gf Janet rather than grind this game. Just a meme btw

Not if you are on win streak

no win streaks after 5 stars lol

Never am i ever lucky i have 80% winrate over 5 games, and after this it took me 1300 games to reach legend. Game is rigged against me for sure….

Damn this is great guys, the simulation model is quite accurate and the results are given in less than a blink. The info charts are very useful as well.

I want to highlight the great use a player at higher ranks can make of the losing streaks info in order not to get “tilted”. I mean, the numbers are cold and statistical, the simulations don’t take into account that tilt you may experience. And actually the probability of getting a losing streak of a whole rank (5 stars) is pretty low. Seeing something as simple as this actually encourages you to stay like “This decission-making rules I’m using are 55% winrate – If I don’t change them at all I’m hitting legend in around 200 games – AND LOSING STREAKS WILL HAPPEN” through the whole road from rank 5 instead of fckin tilting when close to legend.

Done now. Even taking into account the changes with patch 10.2.

Appreciate it for helping out, great information. bebgdaegcede

Hello! Do you think this tool could be updated for the new rank floors? Similar to rank 20, they recently added “floors” at ranks 15, 10, and 5 as well. Thanks!

I am extremely interested as to how you derived the formulas to get the standard deviation and would really really apprecite it if you may send me via email. I am conducting an investigation on the topic and it will be extremely helpful for me (doing IB maths)

I was wondering if you could email me the formulas you’ve used to get the charts. I am conducting a mathematical investigation on the standard deviation. It would be a massive help.
Thanks

It’s awesome. It can be cool to have the same thing for reach the rank 5. A lot of people play for reach rank 5 because legends reward and rank 5 reward give both the golden epic card.

This is extremely cool, now all it needs is for me to give it a variable win-rate depending on my rank :p

This simulator has definitely done everything I wanted from it and more, thanks.

hey i’m emailing on behalf of my boss who’s is publishing an ebook on staking and would like to reference and use your calculator in the section on tournament variance.

Would appreciate if we could continue via email.

Any cookies that may not be particularly necessary for the website to function and is used specifically to collect user personal data via analytics, ads, other embedded contents are termed as non-necessary cookies. It is mandatory to procure user consent prior to running these cookies on your website.